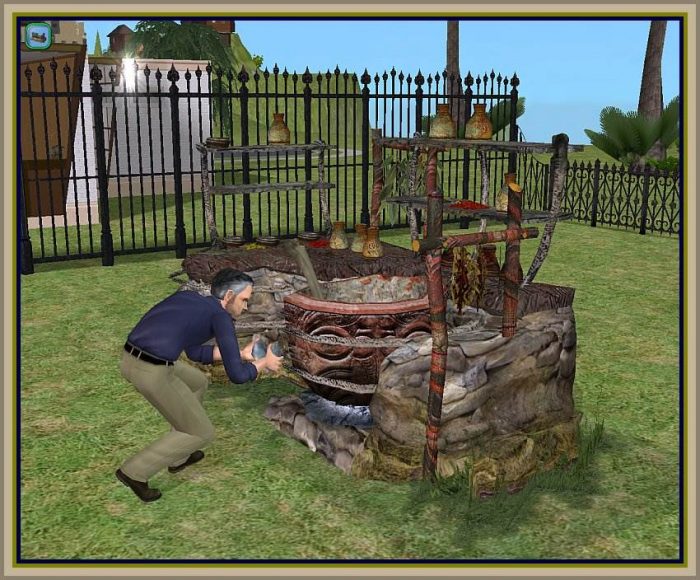 Please backup any files that may be overwritten.

This is an old object I refreshed. It is the Shaman Station, originally converted from Castaway to TS2, by Pescado. I decided to increase its craziness for my taste and you will get a whole bunch unpredictable actions. First it is totally autonomous and of course I cared for logic and non-addiction. It will produce everything that the witch cauldron produces and will not depend on any witch but on the skills and personality of your sims. To produce witches things will depend on how nice or not your sims are: nice sims will produce light things, the opposite will produce darkness. I included witches animations and sims will act and dress according to their personalities. No witches outfits once they are specially (and dully) programmed to redress. Sims will change to the outfit available for them and to make it easy for personal adjustments, I included most of the outfits in BCONs properly identified. The BHAVs pull outfits from those BCONs. To change the cauldron would require to change the whole AL, though it is not a bad idea, it is not practicable. So you get another cauldron from outside, that has always been the best

I tried to make the most variety possible but everything is limited inside the logical of craziness, my best. The object is relatively high poly but very multi-tile, what makes it acceptable. Meshes were not changed, so the main object has 6119 polys and every peripherical object is circa 168 polys, on a total of 1008 polys. Be aware that the original object doesn’t have a logical stop, so once the interaction is started, it cannot be stopped until it ends, but it is short. The first interaction is “light up fire” that is the start and independent from the action. Once the fire is light up, there will be menus to make potions. Witch objects will be added to the sim’s inventory and won’t be much once there will be a lot of randomness added to the personality and skill requirements. All over teen can use it, including visitors. The object costs § 0 once it was supposed to be a reward. It is located in Hobbies/Miscellaneous. PS: Included the file “cs-corefuncs” required for this object to work. The file contains the accessories and global used by the object. 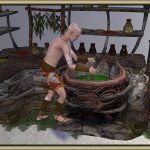 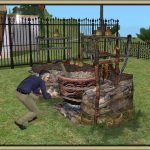 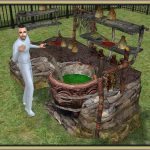 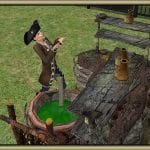 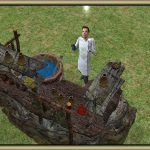